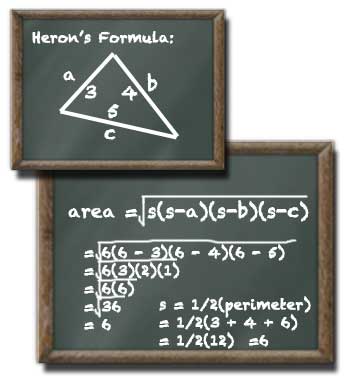 Calculating the Area of a Triangle:

The area of any triangle with a known perimeter can be calculated according to Heron's formula as described below:

Heron's formula is one of the most elegant solutions to finding the area of a triangle that doesn't contain a right angle.

(Triangles with a right angle or known altitude can make use of the simpler pythagorean theorem calculator.)

Heron's formula operates on any triangle where the length of each side is know. In Heron's formula, and most others, the sides of a triangle are typically denoted a, b , c. All other variables in the formula are calculated from these three measurements.

How to Calculate "s"

In this example a semiperimeter is calculated for a sample triangle with side lengths 3, 4, 5.

Try calculating the area of a triangle with side lengths 3, 5, 6. First calculate the semiperimeter as described above. Next follow the formula below. Note that ^0.5 means to take the square root of the calculation inside the parentheses.

If the calculator gives an answer of zero (0) this means the resulting area is too small to be reported at the input precision level. Adjusting the precision from the drop-down menu will allow more decimal places to show and you may get an answer. However, if you were to visualize this triangle it would appear very thin, the area is imperceptibly small or maybe even nonexistant. Try calculating a triangle with side length 1, 2, 3. The result is zero because the resulting triangle has no area, it's really just a bunch of overlapping lines!

What does an answer of "NaN" mean?

An answer of "NaN" likely means your input side lengths cannot possibly form a triangle. If one side is too large relative to the length of the other two side a closed polygon will not be formed and the calculation will fail. No one side can be greater than the sum of the other two sides (it wouldn't be a triangle, the polygon wouldn't be closed)!